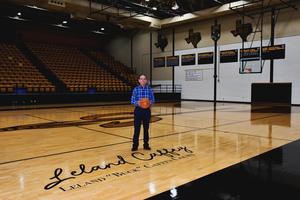 The community is invited to attend the November 17th ceremony of Leland 'Buck' Caffey court at Seminole High School. Caffey won a state basketball championship as a player in 1955 and then was the head basketball coach of the 1979 state basketball championship team.
On Tuesday, November 17th, Seminole ISD invites you to attend the christening of the Leland Buck Caffey Court at Seminole High School. The day will be filled with celebrating the coach that we all love, admire, and strive to be more like.
A full day of events has been arranged for all returning state champions of the 1955 and 1979 teams. This is not only to celebrate Coach Caffey but his former players and teammates.
We kindly ask that you please wear a mask during your interactions with Coach Caffey as to not risk getting him or anyone else ill.
Below is an event itinerary for Tuesday, November 17th. Boys and Girls Athletic Directors, David Williams, and Tri Danley sat down with the Seminole legend, along with his wife Paula, in an exclusive interview on the newly named basketball court.
We will always appreciate the love, wisdom, and influence Coach Caffey has given to Seminole.