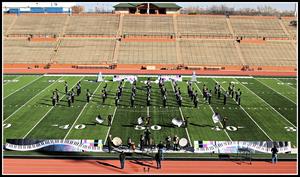 "The talent and drive of our fun, positive, and hardworking students are undeniable.  It is a true blessing for each of us as directors to be a part of," Adam Bodine, Seminole High School Band Director.

On Saturday, October 24th, the Seminole “Pride of the Tribe” Marching Band competed in the Region 16 UIL Marching Contest. The contest was held at Lowery Field in  Lubbock, TX. The title of their marching show this year is “Classics”. Songs for the show include “Toccata and Fugue in D minor”, “In the Hall of the Mountain King”, “Swan  Lake”, and “Prelude in C-minor ”. The Marching Show was arranged by Wally Minko.

Bands are given one of five ratings, "1" being Superior, “2” being Excellent, “3” being  Average, “4” being Fair, and "5" being Poor. The “Pride of the Tribe, under the field direction of Drum Majors Whitlee Tate, Kaylee Garcia, and Drum Captain Ember Webb,  received a Division I (Superior Rating) for their performance. They were the only 4A  band in region 16 to earn straight 1’s from each judge. The Seminole High School Marching Band earned straight 1's (Superior Rating) for their Region Marching Contest. This is the 8th year in a row that they have earned a superior rating at the region contest. In fact, they were the only 4A band in the Region to earn this accomplishment.
The Marching Band placed in the Area Finals for the 2nd time in school history and earned 4th place (1st alternate to the State Marching Contest). This is the 2nd highest placement for the SHS Band at the Area Marching Contest. The highest placement for the band was 1st place during the 2008 Marching Season. All 11 students auditioned and made the All-Region Honor Band. All of the auditioning students made the Region Band, Area Band, and advanced to the final round of All-State.  Ember Webb and Daniel Carrizales were our highest-ranked students at state. Ember earned 3rd alternate in percussion, and Daniel earned 5th alternate in trumpet. State Jazz Band: 4 students placed in the state finals for the jazz competition.

13 students made the band and 2 students earned 1st alternate