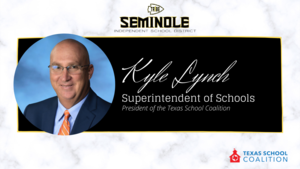 Superintendent of Schools and President of the Texas School Coalition, which represents school districts forced to pay recapture, discusses the state's school finance law and its impact on taxpayers and their local schools.

Texas school districts had to send nearly $3 billion in local taxpayer funding to the state by August 15 under the state’s school finance law — a record amount that puts a crushing burden on taxpayers throughout the state while taking needed dollars away from their local schools.

Yesterday was the deadline by which Texas school districts must make their recapture payments for the 2020-21 school year. Recapture, also known as Robin Hood, is the provision by which school districts with comparably high property wealth per student must send some of the money they collect from local taxpayers to the state so that legislators can spend it on other purposes.

Recapture has been on a sharp rise in Texas. Over the last five years, the amount of money in local funding that school districts have been forced to send to the state has nearly doubled — from $1.57 billion to $2.98 billion. 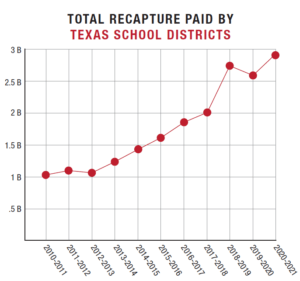 When the Legislature created recapture in 1993, it affected only a handful of the state’s wealthiest school districts. In 2020-21, 160 school districts educating 1.2 million students were forced to pay recapture.

“Texas is relying more and more on local school property taxes to fund state government,” said Kyle Lynch, Superintendent of Seminole ISD and President of the Texas School Coalition, which represents school districts forced to pay recapture. “The current system puts a heavy burden on property owners while pulling critical resources away from local schools. Taxpayers in our school districts are frustrated by the amount of local revenue we must send to the state.”

“Here’s what the rise in recapture means: Texas is using more of the local property taxes collected by school districts to pay for things like health care, human services, and transportation,” Lynch said. “Homeowners are making significant property tax payments to their local school districts, but much of that money is being taken away from education.”

State law gives school districts little choice but to collect local taxes for recapture. Districts that seek to lower their tax rate to reduce recapture must still make those payments to the state, leaving them with less revenue for teacher salaries and other local costs.

Austin ISD, where more than half of students are considered economically disadvantaged, must make a $665 million recapture payment for 2020-21 — the largest by any district in the state.

“The growth of recapture will continue to put a heavy burden on local taxpayers,” said Sara Bonser, Superintendent of Plano ISD and Vice President of the Texas School Coalition. “Local taxpayers expect their resources to support local schools, but unfortunately, the Texas Legislature is spending more and more of those dollars elsewhere.”