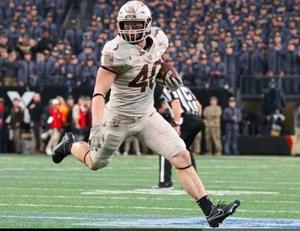 Returning home after graduating from West Point Military Academy, Cade Barnard will pay a visit to his alma mater
"I'm so excited for our kids to have the chance to listen to Cade speak," stated Greg Poynor, Boys Athletic Director and Head Football Coach. "He is one of the greatest players to come out of Seminole and is certainly one of the best leaders. Our guys are in for a real treat." Barnard graduated from Seminole High School in 2018. He was named Best All-Around Student at Seminole High School, Seminole Scholar-Athlete of the Year, District MVP Football 2017, All-State, All-Region, and All-District honors in 2016, and 2017, and THSCA  All-State Academic Team 2017.
We are incredibly proud of Cade and all that he has accomplished.